​Epic Poetry
Epic poetry is form of poetry that follows the form of a long narration. Originally, they were the result of oral history and oral performers, but have also been written in literate societies – such as Milton’s Paradise Lost. Some common traits include vast sets, divine interventions, epithets, catalogues, and a hero who undergoes a quest in which he exemplifies moral attitudes of his culture. Furthermore, they usually begin in medias res “in the middle of things” and use flashbacks to bring us up to speed and invocation, in which the writer invokes a Muse or other divinity to help the story be told. The stylistic form varies based on culture, but each culture tends to stick with one form; the Greeks have their dactylic hexameter whereas Germanic poetry is alliterative verse without rhymes.
​Dactylic hexameter
A form of poetic meter used in epic poetry, like the Homeric works, Aeneid, and Metamorphoses. It consists of six feet that are one dactyl – which is a long and two short syllables –, or it can be substituted by a spondee – two long syllables –, especially in the first four feet. However, the fifth foot is almost always a dactyl and the sixth foot is either a trochee – a long then short syllable – or     spondee.  Also, they have a “comma” function either after the first syllable in the third foor, second syllable in third foot if third foot is a dactyl, after the first syllable of the fourth foot, or after the first syllable of the second foot. The form is enjambed, meaning the meaning doesn’t end at the end of each line. In Homeric, they have two bridges where there is not a break in a word: either in the second or fourth foot if they are dactyls; furthermore, there are exceptions to the rules but later forms of this meter virtually was born in Homeric poetry. 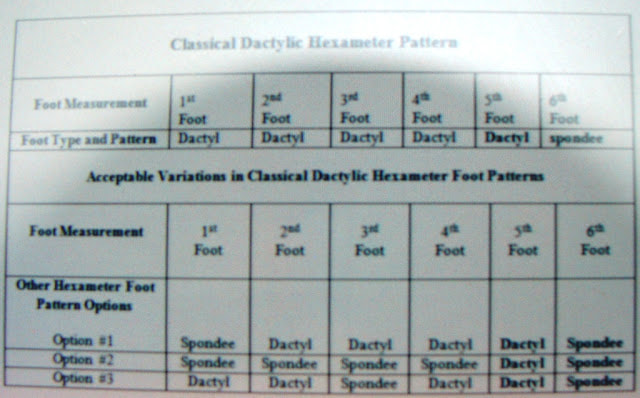